At the end of October, I knew I needed a break from Switzerland for a bit. I didn’t have many holiday days to play with, but with five I had enough to venture out a little bit, and I chose to venture to Morocco.

Morocco had been mentioned to me over the last few years by so many different people; I kept hearing how despite being so close, it’s an entirely different world. And there’s sun. I’d also been following Jenny Tough’s 861km run across the Atlas Mountains.

I booked a flight back to England, where I would work remotely for two days and then fly from London Gatwick to Marrakech.

I then started thinking about what to do with my week in Morocco. I knew there had to be mountains, so that was the first thing I booked. I researched a bit, then chose a two-day trek to Toubkal, the highest mountain in Morocco and North Africa. At 4,167m, it’s nothing too crazy. And the snowy four-thousanders back home in the Swiss Alps are much, much more technical than this. It sounded like a great addition to my trip.

After an early pickup in Marrakech, I met the other guy joining the trip – an American based in London and also working in tech – and we drove to Imlil, the small village where we started the trek at about 10:00. Apparently, we could put our stuff on a mule, but that felt like cheating. The mule didn’t look thrilled either. I sacrificed one 400g item (or rather, someone took it out my bag and put it on the poor thing): my down jacket that I definitely wouldn’t be needing for a few hours. And we set off.

Then it was through the Mizane Valley and east across the floodplains, along mule tracks, and up into the mountains. Occasionally we would pass a man selling nut bars rustled up for hungry hikers, and more frequently we’d be overtaken by a mule holding far too much on its back. There weren’t many others on the path, the notable exception being a group we ended up naming The Rowdy Brits. This wouldn’t be the last we’d hear of them on the trek.

We stopped for mint tea (the first of many cups) after an hour or so, then it was another couple of hours before we got to our destination for the day: the Refuge Toubkal at 3206m. The afternoon and evening were ahead of us, and we’d spend the hours resting, stocking up on Snickers bars at the front desk, and getting to know the others in the refuge. A good day!

We decided to get up early to try and see the sunrise, and we were true to our word. We left the refuge just before 04:00 after filling ourselves with porridge and mint tea, and our pockets with Snickers bars.

With headlamps on, we trekked for two hours without saying much and made good time. Looking up, the stars had joined us. And then, just after 06:00, we reached a ridge not far from the summit and saw the first signs of the day: bright oranges, pinks and blues layering under the still-black night.

From the summit, you can apparently see for miles; to the Marrakech Plain in the north and as far south as the Anti-Atlas and the Sahara. That doesn’t exactly apply to vibrant sunrises, it seems, but we got a pretty sweet deal anyway. Even considering the racket of the Rowdy Brits who were back (rather unbelievably, at 06:30 and with Captain Morgan miniatures). 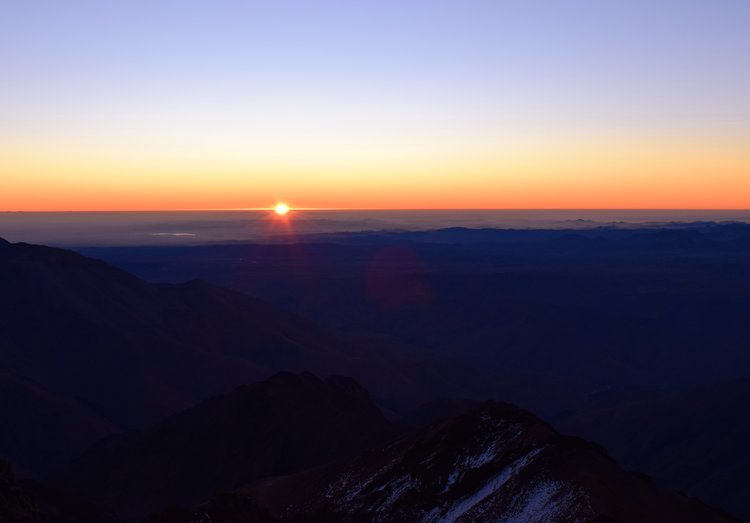 And then, after turning into ice cubes at the summit for about twenty minutes, we turned around and started the walk down. We probably took as many photos here as we did at the summit; we had a beautiful view of the shadow of Toubkal formed by the sun continuing to rise behind us.

The first part of the way down was difficult, with loose scree to prove the mountain was boss. But after an hour or so, we were back at the refuge for tea. And then, with backpacks back on, it was easy going for the last leg.