When I decided I was going to be in Japan for nearly three weeks in July this year, I knew I wanted to climb Fuji. So did Iain. He’d spent the last two months in Nagoya for his PhD and I’d be meeting him out there. So we started making plans of how to make it happen.

Iain had a friend who had done it earlier that summer and had chosen the Gotemba trail: the least popular path, and the longest too.

Fewer people and more space? Perfect. The crowds were the main thing that had been putting me off Fuji, so this sounded like a good compromise.

We were lucky and got just that. For most of the route, we could sit and eat our onigiri (king of Japanese snacks, perfect for long hikes) in the middle of the path if we wanted. Case in point:

We decided to climb Fuji overnight, without booking a place at one of the huts (scroll to the section on Station 7.9 to see why that didn’t entirely work out).

Gotemba covers the southeast side of the mountain, so if you’re a bit slow you can still catch the sunrise from where you manage to get to. The trail starts at 1,450m, which is quite a bit lower than the others (they’re all above 2,000m), so you’re going to get a longer hike. In total, there’s 2,326m elevation gain to get to the peak at 3,776m.

That previous link estimates 7 hours ascent, but I think that’s probably off by a few hours unless you exclude all stops. It took us nearly 11 hours with a 2 hour sleep.

Note to future Gotemba climbers: If you want to avoid the crowds and take this route, make sure you’re fit and know what you’re doing. There is nowhere you can stop for anything until 7th Station (about 6 hours).

We sketched out the following plan:

That was the plan, and it worked out pretty decently for us. We packed a lot of food, including about 2 onigiri each, Japanese omelette, chocolate, energy bars, bananas, and biscuits. For liquids, we had about 5L between us (you might need more). I also brought a bottle of iced coffee.

In my 28L backpack I had packed alongside food and liquids:

Starting off, the conditions were less than optimal. We couldn’t see much at all, but at least it wasn’t raining.

As we started plodding and got above the clouds, things cleared up (cue onigiri shot above for snack stop 1). The first torii . The next would be at the top. Luckily the clouds didn’t last!

One of the benefits of climbing Fuji at night is seeing the sunset from start to finish, which provided welcome entertainment for our rest stops. The moon was nearly full, and the colours of the sky soon became a beautiful layering of pastel blues and pinks.

As night fell, it was time for headlamps. We’d get a lot of use out of these, with just a few breaks to look up and enjoy the beautiful moon and stars without light getting in the way. Remember headlamps! And warm clothes and good shoes. And food.

We kept on trudging up the mountain, the surface made up of small rocks and easy enough to walk on for most of the way up.

Note to future Gotemba climbers: when you see the 6th and 7th stations written on maps, don’t expect there to be anything there. “Station” doesn’t really mean shit, other than a waymark.

On the other more popular routes apparently there are more huts, but here on Gotemba – nope. The 6th station had a sign. After another hour or so we had a collapsed ruin of a hut.

As you don’t have anywhere to stop properly, we just took it quite slowly and had quite a few pauses for snacks and water.

It was all fairly smooth sailing anyway until about 11 pm, when we had a few hiccups. Iain started to get really really tired. He’d not felt brilliant since before we started, and now had a headache – definitely not ideal. We were also ahead of schedule, with nearly six hours before sunrise when we only really needed 3.5 to get to the summit.

We finally came across two huts around the 7th Station with lights (actual signs of life!), and skipped the first one which looked a bit dire. The second one wasn’t much better, but we went inside and agreed the warmth was very appreciated. Online it seems to sometimes be called Akaiwa-Hachigokan hut (you can get contact details here).

Inside were makeshift beds everywhere and a lot of sleeping bodies. Iain sat down by the steps and said he’d be happy to sleep even just there.

I went and spoke to one of the Japanese men sitting in an adjacent kitchen, and asked if there was somewhere spare to sleep. He took us outside to a separate building, in the pitch black with his torch, and I hoped we weren’t going to get shot. But instead, he found us about ten duvets and created a monster of a bed. We didn’t care if they hadn’t been washed for twenty years. I asked him what I owed him, he thought for a while, and replied 6000 yen (although according to this website, this is the standard rate, so he was very Japanese about it).

Yes, we paid £40 for two hours sleep in pretty much a garden shed. And yes, we could’ve actually booked the same garden shed in advance. But hey, it was worth it.

We snuggled in under our mountain of duvets and fell straight to sleep for two hours. When our alarm went off at 1 am, Iain’s head was better and our bones were actually warm.

Other people were starting to head off and we decided to join them.

The last 3.5 hours of the climb were steeper and over more unsteady ground, including bigger rocks. The path was no longer just ours, either. We followed a steady trail of people the rest of the way to the top.

This is probably why it was so quiet on our way up: they’d all come up earlier and were sleeping when we were still climbing to Station 7.

I’m glad we didn’t have this many people around for the whole way, and especially daylight hours, but I could put up with this. It was slow and steady, and you could overtake or pause if you wanted to.

At about four o’clock, we finally got to the top. We’d done it!

We’d left at five pm, so it had taken us eleven hours to get up there with our two hour sleep. 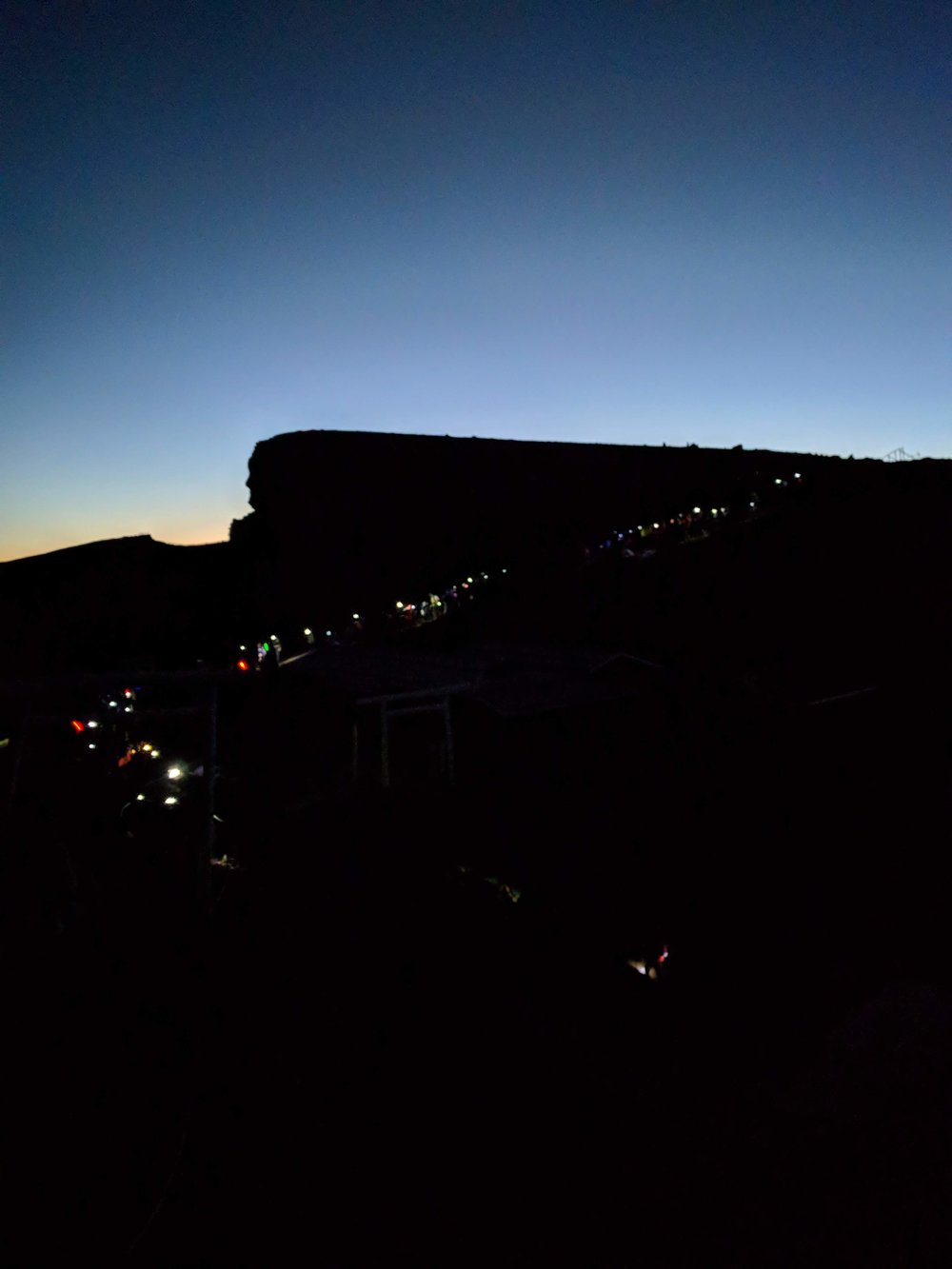 The top, with a thousand other people!

Even with our sleep, we were still a bit early for sunrise – and it was bloody cold up there, even with the adrenaline of having made it. I paid 100 yen to go to the bathroom and spent the longest possible time on the toilet.

Then we went and found our vantage point, admiring the incredible volcanic crater at the top en route. And then we waited.

When the sun started making its way out, it was worth every step to get there – no surprise there, it always is. 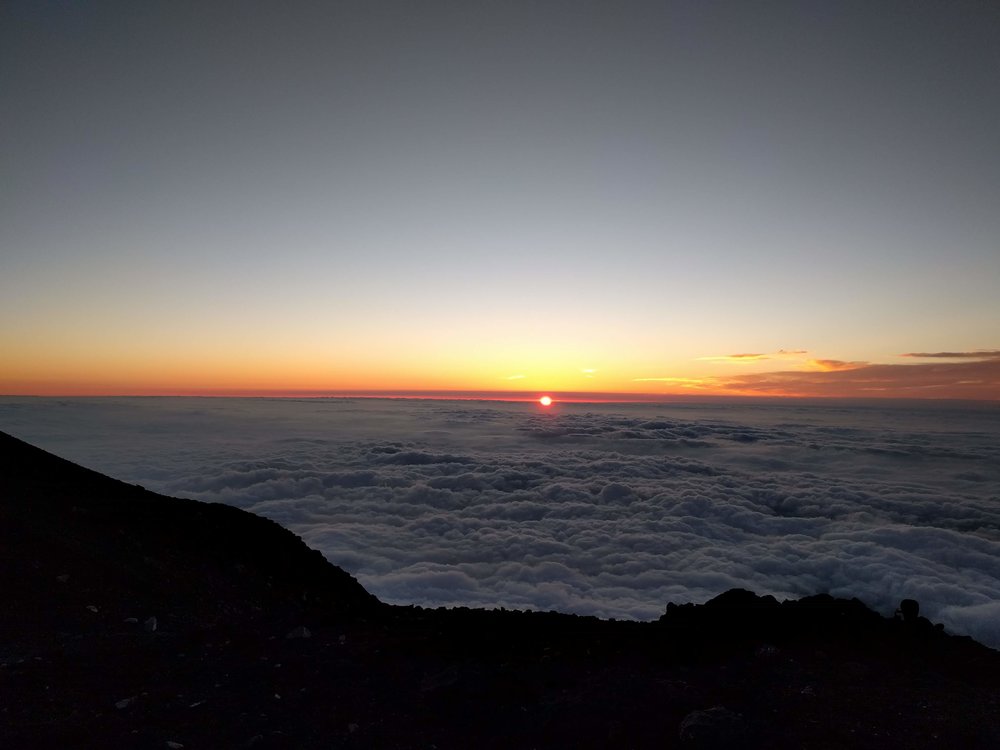 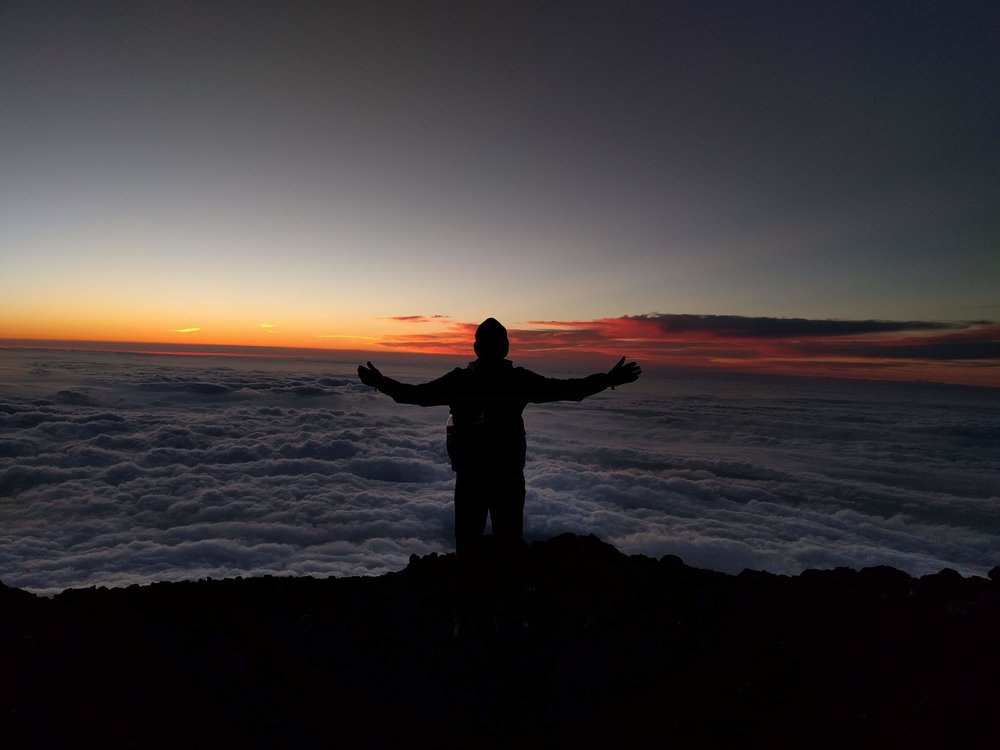 All in all, I’m so glad we climbed Fuji. It was the perfect end to our time in Japan: just over two weeks for me and two months for Iain.

If you’re fit and have spent time in the mountains – even at lower altitudes – Fuji isn’t a hard climb, it’s just a long one.

Come prepared and make sure you have a bag full of enough food and warm layers. You will need that down jacket, even if it’s 35 degrees celsius in Tokyo and you’re in Japan for a heatwave like we were.

Pay too much money to have a sleep in one of the huts if you need it.

And once you’ve conquered Fuji, you’ve done it.

Like they say: everyone should climb Fuji once, but only a fool would do it twice.

We’re happy with once, I think. 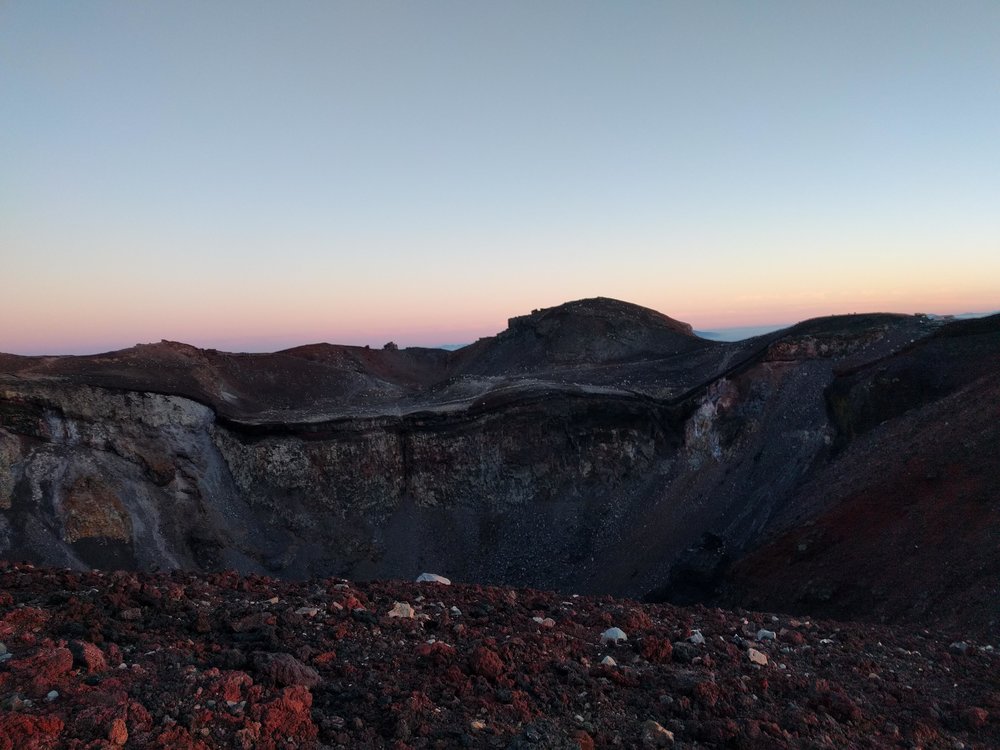 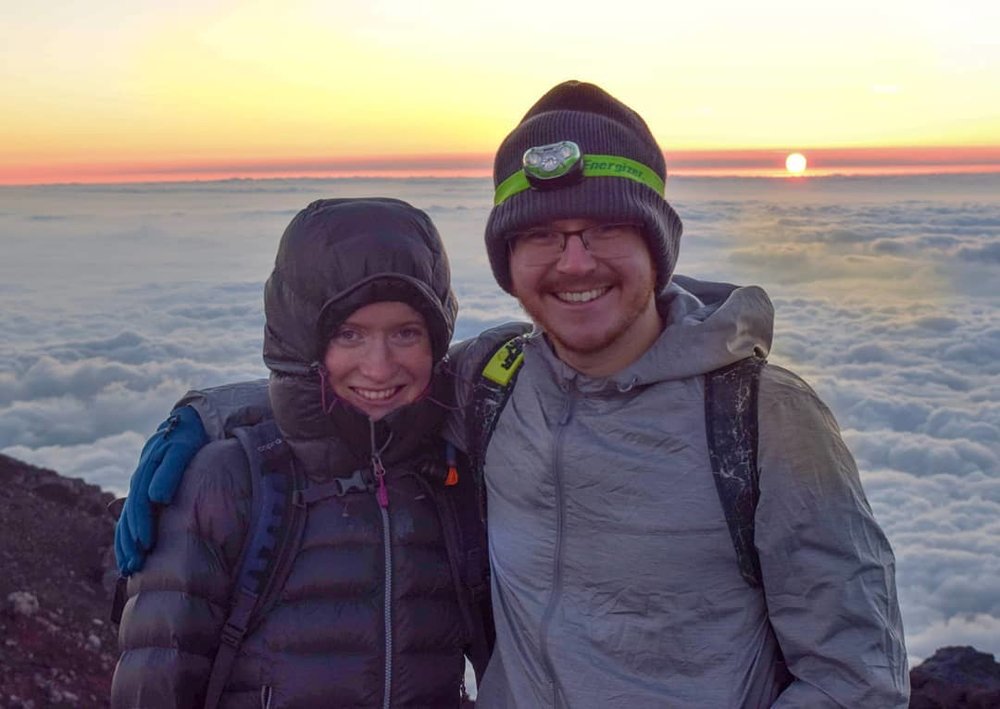